The Colette McAuley NSWT Award Fund is an endowed fund solely for the NSWT (National Senior Women’s Team) it will be awarded annually to a current NWL (National Women’s League) rugby player, nominated by her respective provincial team, who gives back to the sport in the true spirit of the game.

Colette is Head Coach of the University of Guelph Gryphons women’s rugby team, where she has led her team to 9 Ontario championships, and been named U SPORTS Women’s Rugby Coach of the Year in 2008, 2015 and 2017. She is a Director of the Canadian Rugby Foundation. Bio 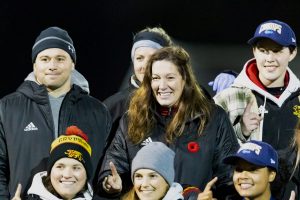 A committee made up of past and present Canadian internationals determine the winner, which is announced after the NWL gold medal game.

USE THE FORM BELOW TO DONATE TO THE COLETTE MCAULEY NSWT AWARD FUND: